So, I don’t make posts like this very often. Okay, I lied–I’ve never written a post like this. I’m one of those bloggers that can’t ever stick to one topic. My posts topics range from fiction to poetry; from relationships to travel destinations. But, like they say, there’s a first for everything.

Before I get into the story, let me start by saying I’ve never really been much of an animal person. I know–that may make some of you dog lovers reading this gasp, but the story gets better. I promise.

So, for whatever reason, my parent’s backyard seems to be something of a popular attraction for the hummingbirds here in Southern California. Out back, there’s an outdoor kitchen area with a thatched roof made from dry straw. Hanging from the wooden columns holding it up is a string of lights, and hanging from said lights are several–3, to be exact–hummingbird nests.

We don’t ever bother them or try to get rid of the little guys. Aside from the little pellets of poop they leave all over the tile countertop, my mom genuinely likes them.

About a week or two ago, a hummingbird momma came along and had two little hummingbird babies. 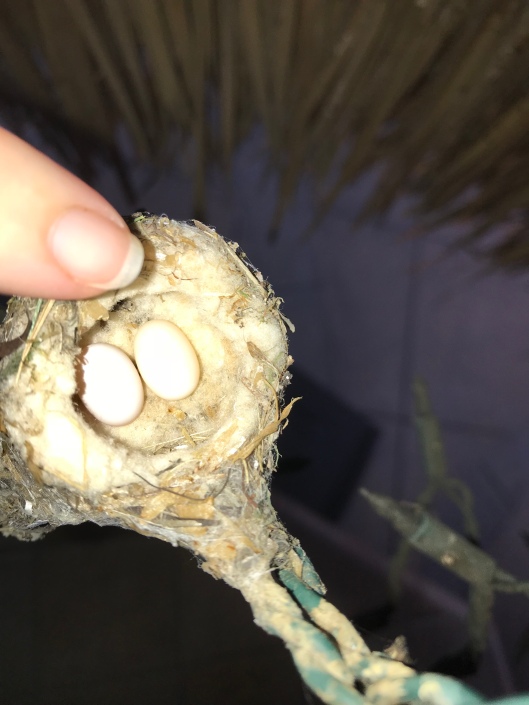 Yesterday, we were in the backyard cleaning up the debris left from our house party the day before when my mom noticed the two birds were no longer nestled in their cozy nest like usual. Instead, they were hanging to the outside of the nest by their feet, almost like bats. Now, I know less than jack-shit about hummingbirds, so I wasn’t sure if this was something they just do, or what. We left them alone and continued cleaning up spilled margaritas and deflated balloons.

A few minutes later we were inside, wiping up in the kitchen. My mom looked out the back window, her eyes slightly widened. She hurried through the sliding glass door and back to where the birds had dangled from their nest. I followed along. She gasped lightly as we got close. “Oh, no,” she said and bent down.

For whatever reason, when I peeked around the corner of the counter and saw that baby bird lying helpless in a crack in the concrete, my heart broke a little. Remember: I’ve never been much of an animal person.

Together, my mother and I carefully lifted the bird and put it back in its nest with its sibling. But the nest wasn’t holding well; it was tiling at an awkward angle, causing the birds to spill out. 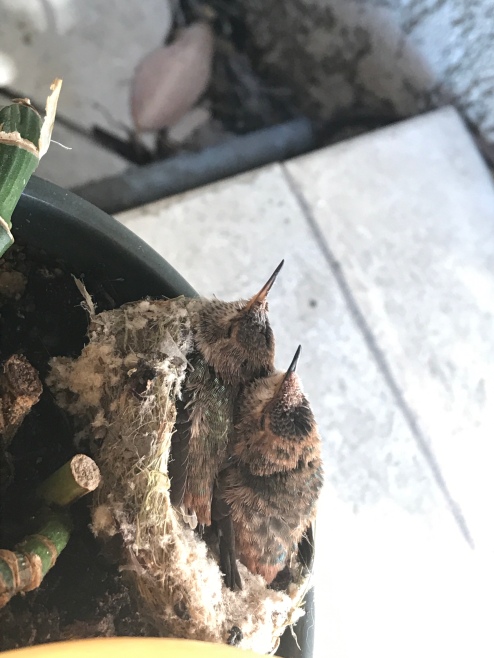 My mom had an idea to put the nest in a flower pot and put it as close to where the nest originally was as possible. We did that–but both of us were plagued with a fear that the momma might not be able to find her little feathered babies. I did some research and found that, luckily, mother hummingbirds won’t abandon their young like other animals just because a human touched them. As it turns out, hummingbirds don’t have a sense of smell.

As my mom and I went back to cleaning up the backyard, we stayed on the lookout for momma bird… but she didn’t seem to be coming back. Hours passed (we were inside at this point, finally done cleaning), and when I still hadn’t seen her, I began feeling a bit antsy, and like I needed to do something. But what the hell am I supposed to do, I asked myself. Not knowing how to care for a baby bird, I did what any other clueless doofus would do. That’s right, I asked Google.

Good ol’ Google suggested I mix 1 tsp of sugar with 4 tsp of water, and feed the birds 1-3 drops every 30 minutes with an eyedropper. So that’s what I did. Sorta. I had a movie to go to, so that cut into feeding time by a couple hours, but I kept feeding them once I got back. 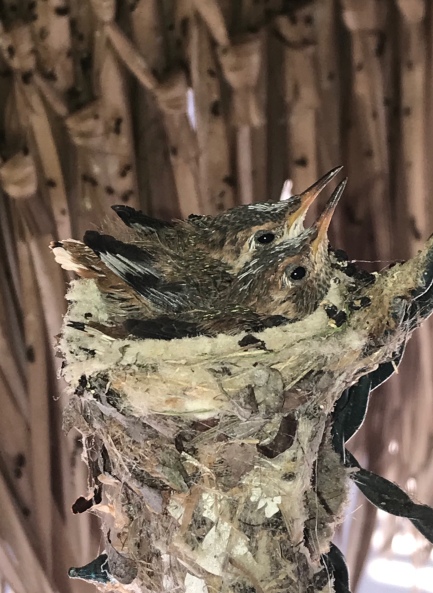 Look at them! I’d be lying if I said they weren’t cute.

It was interesting to say the least, playing momma bird and nurturing these little guys. Though I’d never really cared for animals, I quickly began feeling an odd sense of responsibility for these fuzzy little balls with beaks. The feelings persisted even after they both shit on me multiple times. Hey, fun fact: did you know that hummingbirds actually shoot their poop?

Anyway, I just wanted to share this experience with you all. Today is day 2, and I still have yet to see the momma bird. I got up at 6 AM today and fed them breakfast. It was super chilly over here in SoCal and the temperatures made me a little worried. I’m, of course, hoping the momma comes back and finds her babies soon… But I’ll let you all know how it goes.

8 thoughts on “A Hummingbird Fell from its Nest in my Backyard!”

Find me on Etsy!